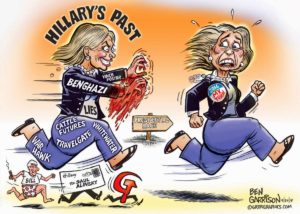 Hillary has endorsed several tax increases on middle income Americans, despite her pledge not to raise taxes on any American making less than $250,000. She has said she would be fine with a payroll tax hike on all Americans, she has endorsed a steep soda tax, endorsed a 25% national gun tax, and most recently, her campaign manager John Podesta said she would be open to a carbon tax. It’s no wonder that when asked by ABC’s George Stephanopoulos if her pledge was a “rock-solid” promise, she slipped and said the pledge was merely a “goal.” In other words, she’s going to raise taxes on middle income Americans. 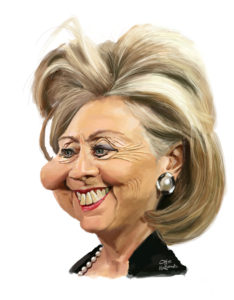 Income Tax Increase – $350 Billion: Clinton has proposed a $350 billion income tax hike in the form of a 28 percent cap on itemized deductions.

Business Tax Increase — $275 Billion: Clinton has called for a tax hike of at least $275 billion through undefined business tax reform, as described in a Clinton campaign document.

“Fairness” Tax Increase — $400 Billion: According to her published plan, Clinton has called for a tax increase of “between $400 and $500 billion” by “restoring basic fairness to our tax code.” These proposals include a “fair share surcharge,” the taxing of carried interest capital gains as ordinary income, and a hike in the Death Tax.

But there are even more Clinton tax hike proposals not included in the tally above. Her campaign has failed to release specific details for many of her proposals. The true Clinton net tax hike figure is likely much higher than $1 trillion.

Capital Gains Tax Increase — Clinton has proposed an increase in the capital gains tax to counter the “tyranny of today’s earnings report.” Her plan calls for a byzantine capital gains tax regime with six rates. Her campaign has not put a dollar amount on this tax increase.

Tax on Stock Trading — Clinton has proposed a new tax on stock trading. Costs associated with this new tax will be borne by millions of American families that hold 401(k)s, IRAs and other savings accounts. The tax increase would only further burden markets by discouraging trading and investment. Again, no dollar figure for this tax hike has been released by the Clinton campaign.

“Exit Tax” – Rather than reduce the extremely high, uncompetitive corporate tax rate, Clinton has proposed a series of measures aimed at inversions including an “exit tax” on income earned overseas. The term “exit tax” is used by the campaign itself. Her campaign document describing this proposal says it will raise $80 billion in tax revenue, but claims some of the $80 billion will be plowed into tax relief. How much? The campaign doesn’t say.

This proposal completely fails to address the underlying causes behind inversions: The U.S. 39% corporate tax rate (35% federal rate plus an average state rate of 4%) and our “worldwide” system of taxation, which imposes tax on all American earnings worldwide. The average corporate rate in the developed world is 25%. Thirty-one of thirty-four developed countries have cut their corporate tax rate since 2000. The U.S. has not. Hillary’s plan moves in the wrong direction.

Hillary Opens the Door to a Carbon Tax

Anyone who votes Democratic/progressive/communist is voting against self, their quality of life, their family, the future of their children and freedom. They are voting for their demise and that of America. 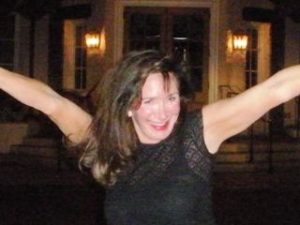 even if it is right in front of us…

A man sent me an email full of vile words when I rejected his advances to me. I reported the abusive email to FB and, of course, they did nothing. I blocked the man.

I also contacted the local authorities and sent them a copy of the email thread. I then posted the email thread on my FB page to warn and alert others to this man’s behavior.

The post got over 50 responses and all agreed that the man is nuts and dangerous for what he wrote to me. 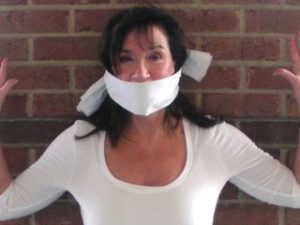 Then a few days later, FB bans me for 30 days for the post.  FB is continually standing with abusers, terrorists, etc. and they ban conservatives for nothing, while allowing liberals/progressives/Muslims and others to spew all sorts of evil.

I have tried to contact FB repeatedly and they do not respond.

When you report abuse, they do not respond orthen haven’t to me and I have heard other people saying the same things about FB. But they will ban a Conservative for doing nothing.

Here is the thread:

“I am posting an message thread from a classic abusive man.. I post pics for fun and there is never any real nudity.. I post pics of me having wine with dinner.. I have a wine business.. that does not mean that I drink all that much.. I have very high morals and standards and this is what I get from a man on FB who comes onto me and I rebuke him…
Chuck Sheehan

any friend of ARCHIE’s is a friend of mine —— not to mention I think you are GORGEOUS!!!!!! Be my VALENTINE Ayn —-xoxoxoxoxoxo

Chuck SheehanHi there GORGEOUS WOMAN!!!! xoxoxoxoToday
Chuck Sheehan
3:14am
Chuck Sheehan
that pic of you on stairs in just the shirt—showing that pretty sexy bra and almost your tight little muff——– you are quite the naughty TEASE —and I love it !!!! You live in Texas ??? For some reason I thought you lived near me here in Juno Beach, Florida ????????
Today
Ayn Dillard
11:41am
Ayn Dillard
Thank you but I do not like the familiar verbiage you are using.. you can’t see a thing ..
Chuck Sheehan
12:06pm
Chuck Sheehan
that’s typical! I love how you post many pictures where you are showing yourself like a cheap whore slut yourself—and then if a male makes a comment agreeing with what you did YOURSELF —you go all fucking BIPOLAR passive-agressive and say idiot shit like this: “I don’t like your verbiage”—!!! What a typical spoiled asshole little arrogant CUNT you really are!!! No wonder you are miserable and cannot stay in a healthy fucking ralationship and are alone!!! You’re mentally SICK cunt. But again—-it’s all my “fault” after YOU yourself post many many suggestive and horny pictures of you looking like a fucking WHORE —-and making tons of posts suggesting the same including that website–“EXPLODING WOMEN”!! WHAT A TYPICAL STUPID FUCKING HYPOCRITICAL CUNT!!!!!!
YOU ARE REALLY A SICK FUCK IN YOUR HEAD—YOU know ????? gO GET SOME CLINICAL help. YOU ARE A PSYCHOPATHIC BORDERLINE PERSONALITY. AND I SAY THIAT BEING A LICENSED CLINICIAN, GO GET SOME HELP.AND I HAVE ALSO SEEN THAT YOU ARE A CHRONIC ALCOHOLIC—–AND I SUSPECT YOU ALLREADY KNOW THAT AS WELL!!!!A CHEAP WHORE ALCOHOLIC BORDERLINE PERSONALITY. NICE!!!! BYE BYE NOW!!!!! HAVE A MISERABLE LIFE—IM SURE YOU WILL—AS LIKE ALL BORDERLINES—YOU WILL JUST GET ANGRY AT SEEING THIS AND BLAME “ME”–NEVER LOOKING AT YOURSELF AND HOW MENTALLY SICK YOU ACTUALLY ARE.”

I think FB should be banned from the Internet and prosecuted for aiding and abetting harm to others while censoring the good and those trying to protect themselves and who expose the abuse and abusers.
FB continually censors Conservatives to promote their liberal/progressive agenda.
Look to the left and click to follow… 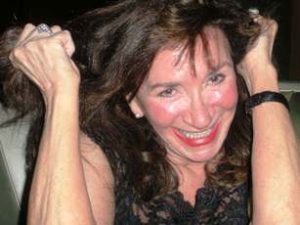 When I got gas today then walked in to pay… a large black man held the door open for me a long time…. as me, a petite white woman, parked places away had a distance to walk… but this gentleman spotted me and held the door open anyway….

In the Quik Trip while paying, I noticed a black couple talking to a white man about the horrors that occurred in downtown Dallas.

Everyone was polite, kind and respectful to one another.

There is no race war except what as been inflamed by Obama and his evil minions to those who are fragile, on the edge and stupid enough to buy into it. I see nothing but kindness to one another among the races where I live along with respect for the police, ‘our protectors’.

My hair stylist is a black woman…. I don’t even think of her race… we are friends… And she has commented several times, that ‘they’ are trying to create friction between the races…

God bless and keep us all!