Deprecated: Methods with the same name as their class will not be constructors in a future version of PHP; RSS_Import has a deprecated constructor in /var/www/wp-content/plugins/rss-importer/rss-importer.php on line 42
 November | 2015 | A WordPress Site

Treaty – The United Nations Framework Convention on Climate Change (UNFCCC) was opened for signature at the 1992 United Nations Conference on Environment and Development (UNCED) in Rio de Janeiro (known by its popular title, the Earth Summit). On 12 June 1992, 154 nations signed the UNFCCC, that upon ratification committed signatories’ governments to reduce atmospheric concentrations of greenhouse gases with the goal of “preventing dangerous anthropogenic interference with Earth’s climate system”. This commitment would require substantial reductions in greenhouse gas emissions (see the later section, “Stabilization of greenhouse gas concentrations”)

Article 3(1) of the Convention[8] states that Parties should act to protect the climate system on the basis of “common but differentiated responsibilities”, and that developed country Parties should “take the lead” in addressing climate change. Under Article 4, all Parties make general commitments to address climate change through, for example, climate change mitigation and adapting to the eventual impacts of climate change.[9] Article 4(7) states:[10]

Cathie Adams of the Eagle Forum has been watching this develop and attending meetings since 1997… she is readying to attend the meeting in Paris after Thanksgiving.

“To achieve world government, it is necessary to remove from the minds of men their individualism, loyalty to family traditions, national patriotism, and religious dogmas.”Brock Adams – director of UN Health Organization.
https://blog.womenexplode.com/2011/10/agenda-21/

“We’re all going to die in five years” unless a legally binding framework to cut greenhouse gas emissions is accepted by the 192 parties attending the United Nations’ confab in Durban, South Africa. That is how a question was couched to a group of environmental extremists who claimed that the United States, Japan, Canada and other developed countries are roadblocks to a “progressive and aggressive solution,” thus turning the annual UNFCCC meeting into a “traveling circus that cannot decide.”  Fifteen thousand attendees are expected at the Climate Change meeting representing 192 parties, 191 representing countries plus one for the European Union, assembled November 28 through December 9.
FYI… the UN uses the US as an income stream to fund its programs. Climate change is a hoax to implement rules, regulations, restrictions, taxes and control.
They are using the EPA  ‘Climate Change hoax to implement a NWO under the rule of the UN.

According to founder of  Weather Channel, global warming is about as true as Hillary Clinton’s Benghazi testimony. He called out climate alarmists with a barrage of facts based on actual science and not wishful thinking. As it turns out, if you chart global temperatures back into the ’70s, there are absolutely no signs of global warming.

Convention on Climate Change admitted that the goal of environmental activists is not  to save the world from ecological calamity but to destroy capitalism.

http://news.investors.com/ibd-editorials/021015-738779-climate-change-scare-tool-to-destroy-capitalism.htm#ixzz3sFXSvZD1
A meat tax?…  this climate change hoax is about taxes, regulations, rules and control of the world’s resources to be in the hands of a few.

A London-based think tank that supports slashing meat consumption is calling for the radical diet change to be “high on the list” of strategies studied by world leaders gathering in Paris next week to discuss global warming.

Total enslavement of the planet

As the UN document says, “We commit ourselves to working tirelessly for the full implementation of this Agenda by 2030.”If you read the full document and can read beyond the fluffery and public relations phrases, you’ll quickly realize that this UN agenda is going to be forced upon all the citizens of the world through the invocation of government coercion. Nowhere does this document state that the rights of the individual will be protected. Nor does it even acknowledge the existence of human rights granted to individuals by the Creator. Even the so-called “Universal Declaration of Human Rights” utterly denies individuals the right to self defense, the right to medical choice and the right to parental control over their own children.

Now the UN has decided such piecemeal slugs aren’t enough to underwrite its grand plans to save the world from itself. So hide your wallet. The UN wants all you’ve got and then some.

December convening of the United Nations Climate Change Conference, COP21, in Paris. Warming dogmatists demand, a legally binding & universal agreement on climate change with fixed, binding global payments & wealth transference from developed countries to those it deems most in need.

http://www.breitbart.com/london/2015/03/06/now-the-un-is-demanding-worldwide-taxes-for-climate-change/
Bible says the earth abides forever. Global warming is a con and hoax. The “end” is the end of the rule of Satan, the god of this world. Global warming hoax is implemented for, taxes, regulations, rules and control. Control of all earth’s resources by a certain few.
https://blog.womenexplode.com/2012/03/globalization-is-anything-about-this-beneficial-for-america/

Referring to the attacks on Paris Obama minimizes them calls them ‘setbacks’  but when referring to gun violence in US, he maximizes it in order to implement his gun control agenda. Everything Obama says, does and why he lies, is to harm the US, to escalate Muslim influx, to weaken America and to empower those who wish us destroyed. He wants Americans disarmed while he allows refugees, illegals, and immigrants into our country. Obama has indebted us more than any other president. Financial destruction is one way of Jihad. 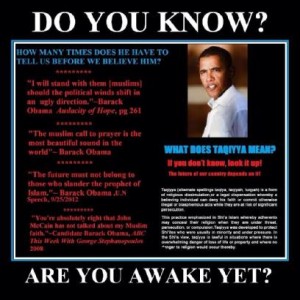 Obama avoids calling out Muslim terrorists which is exactly what they are because he stands with them. ISIS was created because of Obama. He allows them to grow, become stronger and to infiltrate more of the world including America as he allows refugees to enter even after the attacks in Paris, when there is no way to vet these people. We are being set up for attack by Obama.

We have fought Muslims for centuries and will be fighting their evil cult of hate and death forever and under the Obama regime, this evil has been given more power than ever before.

Obama & Democratic/Progressive/Communist Party are doing the equivalent, of introducing an invasive species, Muslims -‘illegals – refugees, to an area of world where they do not exist. It’s the equivalent of the situation with the Asian carp in American rivers and streams, it has taken over it eats and consumes the eggs and babies of the natural species there, this is the type of warfare the American people are up against.

This is not some plan of a buffoon or idiot, this is strategic analytical and criminal attempt and effort to kill the American people and their children here in America. What was once the Democratic Party, is now a Progressive/Communist cancer to the American way of life.

If Congress does not immediately pass a bill, that states you must be a legal citizen of the United States of America for no less than 18 years to be eligible to vote and you must have a photo ID to vote, they are working against the best interest of the citizens of America creating a catalyst for Civil War. That is their intention, to create chaos, to destroy, kill and disrupt the lives of all Americans with the intention of the destruction of the American/Christian/Judeo way of life. To destroy our Constitution, insert America into the NWO under the rule of the UN to create a one world religion and government where there is no choice or freedom. This is exactly what our forefathers warned us about and why they created the three branches of government as checks and balances. Obama’s dictator rule with his pen and phone is not how our government works. Obama is a bought and paid for puppet placed for America’s destruction and any media outlet or others who cover up for this evil are complicit.

http://www.breitbart.com/big-government/2014/09/18/ted-cruz-senate-democrats-abandon-hillary-clinton-s-support-for-revoking-u-s-citizenship-from-terrorists/
The free world will be at war with Muslims forever as we have been for centuries and Obama and his vile regime has put America in danger like never before.

Mosques are where they prepare for war. There are no moderate Muslims. There are those who terrorize and those who stand by and watch. They are all in it together with agenda to kill the infidel, to destroy the Western way of life and once they do, they will kill one another. Islam is a cult of hatred and death.
http://www.cnn.com/2015/11/16/politics/donald-trump-paris-attacks-close-mosques/index.html
The Muslim in our White House isn’t interested in America winning.
http://thefederalist.com/2015/11/16/obama-on-isis-im-not-interested-in-american-leadership-or-america-winning/
One Muslim being truthful and stating their intent. “It’s our obligation to implement Sharia.”
http://www.israelvideonetwork.com/at-least-one-muslim-is-telling-the-truth/
Islam means submit and you will not be killed. It does not mean peace.
Muhammad sent letters to kings & leaders of surrounding countries & tribes, inviting them to surrender to his authority & believe in him as messenger of Allah. He always ended his letters with the following two words: “Aslim, Taslam!”. Although these two words are derived from same infinitive Salama which is the root of Salam, i.e. ‘Peace’, neither one of them implies‘peace. The sentence means ‘surrender & you will be safe’, or in other words, ‘surrender or face death’. So where is the meaning of ‘peace’ in such a religion that threatens to kill people if they don’t submit to it?
There is no practice on earth that is more Antichrist and will use force than Islam, they have never been a friend to the church and have killed and imprisoned the saints.

He will be duplicitous, and initially will appear as a man of peace.  The Antichrist will preach to the masses in the large sports stadia that were constructed in recent years.  During the 3 ½ years of the Tribulation, his true evil character will be revealed.  He will be the worst tyrant the world has ever known, specifically persecuting Christians. 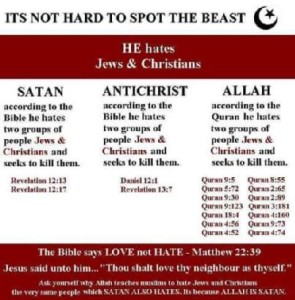