I went from happy with no injuries to  this bec 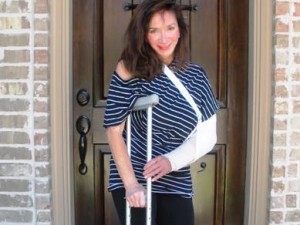 ause I entered a particular restaurant where they were mopping before closing in a dark environment with no wet floor signs. I was wearing  low rubber-soled shoes and even then,  the floor was so wet that my feet slipped out from under me and I landed on my left side slamming my elbow and left hip into the concrete floor.

All I asked is that they take care of my medical and a bit of pain and suffering. I was told by the restaurant manager, the next day, that they would take care of everything and that I am a valued client.

The insurance company interviewed me while I was on pain pills and before I had the surgery to fix my broken elbow.

The restaurant manager (wasn’t there when I fell) and other employees when interviewed by the insurance company all told different stories and all lied. They were sloppy in their recollections and clearly focused on self protecting.

They began cleaning up the restaurant 45 minutes before closing. While the busboy (an illegal alien that we needed an interpreter for)  stated in his deposition that he never started cleaning until everyone was gone and the lights were turned up.

Their insurance company denied my claim.

So I was forced to get an attorney and go through the tedious, full of delays, insulting,  and irritating legal process.

During the depos, under oath, the server did tell most of the truth. They had padded the bill to make it appear that we had more to drink then we did. We were in there 20 minutes, I had one sip of champagne and they had charged us for four splits of champagne as they comped the bill, because I had fallen, so on that night we did not see what we had been charged. They were planning their set up of me and cover up of themselves before I even left for the emergency room.

During my deposition, I was accused of being a racist which had nothing to do with my falling.  An illegal alien did the mopping that caused my fall. A black bartender, covering for the manager who had left earlier that evening, talked to me while I was trying to figure out how badly I was hurt.  What did race have to do with any of this? It didn’t. Except that we were white and they were trying to vilify us. So, in actuality, they were being abusive and racist against me.

We discovered the black bartender was fired a few months after my fall and had been charged with felony assault on his girlfriend. When we tried to depose him, he would not return our calls. And we were told that while the illegal alien came to the deposition, he would not be in court to testify because he was illegal and afraid of being deported.

It was clear this group was in a hurry to leave that night, the manager had left earlier that evening, and didn’t care who was harmed or what repercussions might occur.

After all this, they settled. I got all my medical paid and more pain and suffering than I was originally going to ask for. This ordeal took almost two years and in so doing, cost the insurance company more money and caused me more stress. Lawyers made money off this stupidity and waste. Their insurance adjuster attorney was like a government bureaucrat, short, pale and severe. We had to cancel one depo because the little man had three kidney stones. And that shows exactly what and who he was, a pissed little man with no real power, but to hurt people as he attempted to keep from paying claims. It was all deflecting, blaming and lying… just like our current administration.

If restaurants are open and they start cleaning, they need to be boycotted  because if you fall and are injured, they will claim no responsibility and that there were wet floor signs when there were none. They will claim you are clumsy, drunk, or a racist, Ha!  Even if there is a ‘wet floor’ sign and someone falls, they should still be held responsible. People don’t enter restaurants to watch staff clean or to be injured.  Restaurants should never clean before closing. 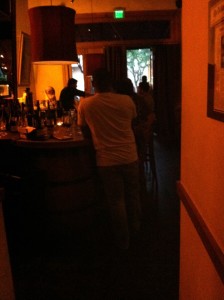 I fell right behind where this man is standing on the way to the Ladies’ Room, the only way. The place is dark, the floors are scratched concrete and ill kept. I have never fallen in my life, never had a broken bone, am a former ballet dancer and fit as anyone could be. It was like walking on black ice, yet they tried to blame me.

Also, we discovered that this place is known to traffic in drugs. When you are in a place to relax, meet with friends, have fun and enjoy, you rarely think what goes on in the place behind the scenes. And why should you? You are there to be with who you are with not fraternize with the help, but there can be hidden harmful dangers in some places, even those that appear respectable and in good locations as this place was when you are paying to be served and to be in a safe environment.

I have always been a careful person but this incident has taught me to be even more cautious. Because of the way I was treated, I will never enter this place again nor will my friends and it was once considered an acceptable place to go on occasion. Had I been treated well, they paid my claim right off, and treated me with respect, it would have saved money, time and created an amiable outcome. The way it was handled, was a waste of money, time, resources with insults, alienation and unprofessional interaction, except by the ‘crook style’ of doing business.

Oh some establishments smile and ‘act’ like they appreciate  you when you are a paying customer, but when you are harmed because of their negligence, and they need to show responsibility, they will blame, deflect and lie to get out of it. Just like Obama and our current administration.