He is where he is in part because Oprah had him on her show to ‘promote’ his book then ‘suggested’ that he ‘run for president’… because he was ‘the one’. ‘Her show’ that panders to, mocks, insults, talks down to and exploits America, Christianity, whites and everything American for her profit.

Obama and Oprah attended Rev.Wright’s church of ‘hate’ America (Wright matches up gays) and ‘hate the white race’, for years. Oprah ‘promotes’ that there are ‘many ways’ to Heaven (as if this woman knows, or is an authority on anything. Ha!) She holds herself out as a ‘new age guru’. She ‘promoted’ homosexuality on her show and had every ‘freak circumstance’ that exists to bring her audience and revenue to promote ‘her agenda’. She appeals to the lowest denominator and the common. She coined the phrase referring to ‘Obama as the one’. Ha! The one what? The most evil one that America has ever seen…the one to deceive…the great deceiver. Oprah helped create Obama’s media image and the NWO uses her for her influence on the common, easily brainwashed and led masses.

You do not have to have a seminary degree to know and anyone who reads the Bible knows that Jesus is talking about individual stewardship in an individual’s relationship with God.

For it is God who gives each person different portions of gifts, talents, and treasure to manage according to His sovereign will. It is God who entrusts people with what they have, not the government. We are each born with our genetics, our personality, our intellect, our talents, our gifts, our lack and into our individual circumstances.

God is the One who will judge the faithfulness of each individual’s stewardship and blessing, or lack thereof. (not Obama/Oprah, or the government) In Luke 12:48, Jesus, God the Son, is exhorting individuals to be faithful and give generously without regret.

One has to wonder if Obama has replaced God with his administration… ‘the government’. He must believe that when he says, “much is given,” he refers to what is given by the government; and “much is demanded,” as that which is ‘demanded’ by the government. This is 180 degrees opposite to the truth. 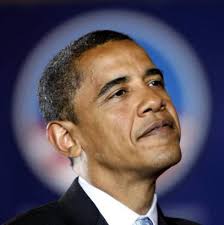 We have had egotistical presidents before, from both political spectrums, but never have we had one who saw himself as replacing God, or one who views his administration as acting on God’s behalf, or instead of God.

Misquoting the Scripture is a practice by some politicians to advance their cause. But this abuse of the Scripture and viewing one’s administration as the judge and executioner — not for crimes, but for personal stewardship — has reached a new level of egotism.

Sharia Law is a political ideology with goals to take over America and the world. They ‘sanction lying’, taqiyya, to achieve their goals. They use tactics to infiltrate, propagandize, ‘elect Muslims to office’, and convert Americans to Islam, in order to establish Sharia law as the law of the land, and make the country an Islamic nation, ruled by a Sharia-compliant caliph.

When Obama reads from and quotes the Bible it rings so false that it reeks of evil. Nothing about Obama is honest, true, or of the good… he is only about his agenda and he will do anything to achieve it. The Obama Regime indebts and sucks money from the American people and launders it to his causes and friends. It is Mafia-like nothing about it is Christ-like… Obama’s Regime is anti-Christ…

But Obama is doing, saying and will do whatever he needs to and can, to get four more years to further his agenda of the destruction of America. Should he succeed… God only knows what evil he and his backers will unleash. He, his backers and supporters are an example of total corruption and evil…

Obama is without boundaries, respect, conscience and is full of conceit, lies, arrogance and usury. It seems the man will stop at nothing to try and win a second term. He wrote in his book that he ‘promoted’ on Oprah’s show, should the winds shift that he will stand with the Muslims…and now, he quotes the Bible to further his evil agenda…It’s laughable were it not so sick, twisted, corrupt and evil.

He also stated in his 1st book,”My father’s dreams, are my dreams”. And his father was quoted as saying,”American people could be taxed 100% of their income and it would be legal.They then can receive all they need from the Government”…”

Obama stated that we ‘are not a Christian nation’ and now uses, ‘mis-uses’ the Bible as a tool to  ‘campaign’ his agenda which is to ultimately exploit and enslave America.

The Obama Regime is clearly anti-Christ and pro-Muslim. The duplicity and agenda of the Obama Regime is pure evil… Obama and Oprah have mocked America for their gain and agenda long enough. Deception, corruption, lies and evil are what they promote and stand for…It’s all Leviathan spin! These people are socialists, marxists, communists and worse and are against everything America is and stands for… Enough of them, their corruption and lies!!!

4 thoughts on “‘He’ mocks the Bible, Jesus Christ and Christianity…”