fem·i·nism – noun – advocacy of women’s rights on the basis of the equality of the sexes.
I agree concerning equal rights – in that, women should receive equal pay for equal work and that women should be treated with respect in the work place and not subjugated or overpowered by unwanted or unwarranted sexual advances and innuendoes  by some needy, insecure penis in the workplace, business world or anywhere else.
Other than that – what I see and hear that these radical men hating, vagina hat wearing foul-mouthed women are doing by their marches and protests is about as unfeminine and not woman-like as anything could be.  These women who are modeling for their daughters and youth that to dress and act like an idiot is womanly. It’s sad and disgusting. Imagine what these women hating men are doing to their sons as they raised them and model their sick not womanly behavior.
I am a feminine woman –  I like myself. I like men and I enjoy being admired as a woman and flirted with as appropriate to time and place. I am a strong secure woman.
The women donning these idiot costumes with their vile stoopid signs concerning their private parts are not strong, secure, intelligent or wise.  They are displaying neediness, insecurity , negative self-image and more. And their doing this has less to do with men and more to do with their internal lack of self-worth. It’s about them and no one else. They project their insecurity and hate of self into the world because they can’t stand who they are. 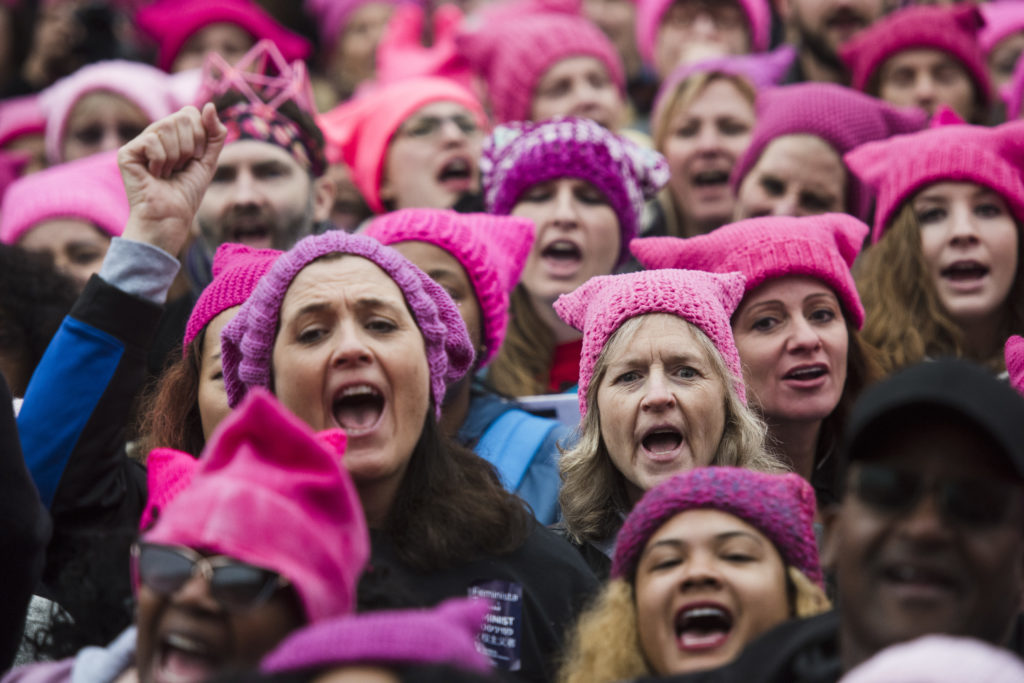 These women may think they are free thinkers but they are so brainwashed and controlled that they actually have no individual thoughts. They are following a group twisted in distortion, insecurity and fear. They are actually imprisoned.  They are easily manipulated by those who want to use them for their purposes – which is that of destroying their femininity and making them a  sick distortion of themselves. Insecure people like to connect with a group in order to help or make them feel validated to bolster their insecurity and cover-up for their lack of self-worth. Few of them could/can stand alone . They are a gang or a herd of loser/bullies feeding off one another’s frenzied energy.  Women who hate being women – hate men –  are lost and full of self-loathing. They are lowly and not women in my eyes with their foul words, idiotic hats and costumes.
It’s unfortunate that some men these days who are turning into ‘p—ies’. God made men and women differently for reasons. Men are to protect women.
Women such as these  are turning men into vaginas while they are acting like dicks. They are destroying the natural flow of things. they are losing their femininity while gaining  nothing but the right to act the fool – like some kind of jester to the world in a vagina hat.
As a woman,  I can match intelligence with most men, but it’s nothing I feel I have to prove. I just  want and need to be my wonderful feminine womanly self – be who I am. But you need to know who you are  in order to be who you are. That’s all any of us need… because when we do that – we are secure in self, can stand up for self and are equal to all.
I have been sexually harassed in the work environment. I exited,  addressed it immediately, sued and he settled.  And doing this, did not make me feel  less than a woman and that I needed to wear a vagina costume to prove I was a woman.
When you feel less than, you can flip into trying to feel better than and you do this because you don’t feel equal to.
A book for awareness and healing…
DADDY THROWS ME IN THE AIR…. on Amazon, Barnes and Noble, etc.