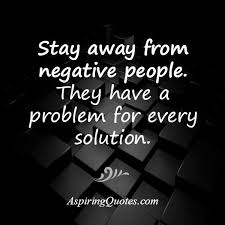 Remaining positive in a tough situation can be difficult, but the outlook you choose can affect every aspect of life. Positive and negative people have very different attitudes, thoughts and ways of dealing with their circumstances.

To keep negative energy out of your life, be aware of these common traits of negative people… not all negative people will have all these traits but they will have many of them.  You will see a trend in their way of looking at and dealing with the world.

Negative people kill the souls of others, destroy the happiness in life, and definitely ruin fun times. Destroyers of  hope and joy… they are full of fear, insecurity  and become defensive when called out on their behavior. They will tend to project it back onto the one calling them out. They dodge responsibility. They have been damaged in their past and refuse either out of denial, fear or ignorance to look at themselves, their mind set, and from where it derives.

Block their negativity from your life. Block their trying to kill your happiness and joy. Some of these people seep into your life unnoticed, under the guise of ‘caring’ and ‘friendship’ … but what their motives are is to suck off your life energy for as long as you will allow them to… then when you need some energy from them, they either give it half-baked, while even making you feel worse in their subtle way of negativity, are not there for you at all or you will end up feeling worse than you would have were they not there at all.

If allowed they can and will bring you into  the aby 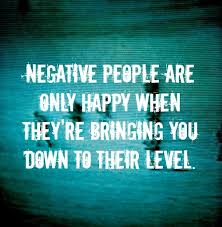 ss of their negativity.  Misery loves company. They are not genuinely happy so they can’t be supportive or genuinely happy for others. They may utter supportive words, at times, but if you listen with your gut, instead of your ears, their words will not feel sincere.  Even the words ‘ I love you’ will feel empty and some can utter that phrase as easily as saying thank you… which is a sure sign of insincerity.

Negative People are Afraid of Change –  Negative people tend to fear change. Even if they aren’t happy with their current circumstances, instead of thinking “things could get better,” they believe that change is always for the worst. They are too afraid of losing what they have to let it go so that they can gain more. So they may stay in stagnant or  bad situations because they are afraid of change while they complain all the time about their situation.

A positive person welcomes change and is always open to new experiences.

Negative People Aren’t Grateful – Negative people are so focused on the negative that they are blinded to the positive things that surround them. They don’t show gratitude toward their friends or family members, and they take their blessings —  like their job, home and health — for granted.

Positive people recognize their blessings and show gratitude for what they have.

Negative People Don’t Sincerely or Genuinely Care About Others – Negative people aren’t concerned with hurting anyone’s feelings. They are too focused on themselves to worry about someone else, even the people that care about them. If the conversation isn’t focused on them, there’s no real interest. 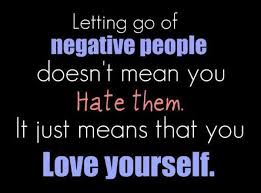 A positive person is always open to making new friends, and they enjoy making others happy.

Negative People Blame Others for Their Mistakes – A negative person doesn’t like to admit when they’re wrong. Even when it’s clear that they’ve made a mistake, a negative person will blame others for something that is really their fault. They will not apologize, or if they do it will feel insincere. Some cry at the drop of a hat to get them out of responsibility or to make others feel sorry for them. Negative people enjoy playing the martyr.

A positive person takes responsibility for mistakes and failures. 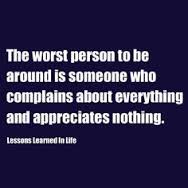 Negative People Believe the World Revolves Around Them – A negative person believes that the world owes them something. They think that if they’re having a bad day, which is more often than not, everyone else should cater to them. They let their negative feelings and poor attitude drive them on a daily basis. They are self-absorbed.

A positive person is able to put the needs of others before his or her own.

Negative People Don’t Apologize – “I’m sorry” is a phrase that negative people avoid even dread. They see apologizing as a weakness. It means admitting that they were wrong. While a positive person is quick to apologize for hurting others, a negative person will do almost anything to avoid an apology even cry to illicit pity for themselves… oh poor pitiful them.

A positive person is able to admit when they’re wrong and apologize sincerely.

Negative People Focus on Personal Gain – Negative people are willing to step on everyone around them if it boosts their success. They are concerned with their own personal gain and will do anything that benefits them, despite who it hurts in the process.

A positive person would never put someone else down in order to get ahead.

Negative People Enjoy Seeing Others Fail – Negative people don’t root for anyone, even if it’s a family member or a friend. When someone else experiences success, a negative person becomes jealous and bitter. They may give lip service to another’s good but they really don’t feel it… what they feel is envy.

A positive person is sincerely happy to see others succeed.

Negative People Can’t Accept Constructive Criticism – Constructive criticism can be hard to take, but it’s often necessary in order to learn and grow. A negative person hates to be criticized. Even if someone is trying to help them, they become closed off and they see criticism as a threat.

A positive person welcomes constructive criticism, seeing it as a learning opportunity.

Negative People Think They Know Everything – A negative person sees learning something new as a sign of weakness. They like to act like they are already an expert in every subject, instead of taking the time to truly expand their knowledge.

A positive person always strives to learn something new. 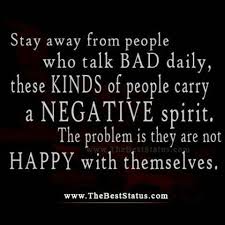 A positive person is able and willing to cheer someone up when they’re feeling down.

Negative People Aren’t Willing to Work for Change – Negative people aren’t happy with their situation, but they also aren’t willing to work to change anything. A positive person knows they have to work for what they want, while a negative person would rather sit around and mope than put in any effort.

A positive person sets goals and works hard to achieve them.

I have a ‘friend’ that would often comment to me that just being around me makes them feel happier and that I calm them.  That they like my energy.  They would also say that they don’t have any friends.  I usually felt drained and stressed after being around them. I tried to be a good friend… I would invite them to dinner, cook a nice meal because according to them they have such a stressful busy life with job and family. They whined all the time about all the stress in their life.

Then it was my time to need some extra attention. And when it was, they were an hour late, came in stressed and dithered. I immediately felt the usual stress energy around and coming from them  and it made me feel worse and this was when I needed to feel nurtured and calm. They talked about themselves, how stressed and  hurried they were to get to my house. They drank almost a whole bottle of wine while yammering on and did things I did not want nor ask them to do.  What they decided to do what more important than what I needed. Their concern was that they take a bath… while I was feeling neglected and that they were being put upon. I detested being around them so I came into myself and calmed myself down that night. 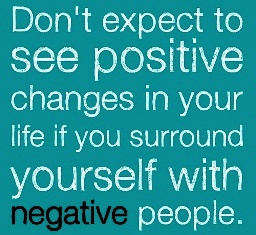 The next day, I addressed how their behaviors made me feel… and they whined that they went out of their way for me even saying that I made them cry. It was a pathetic display… but showed me clearly what needed to be revealed.

My eyes were opened. This person is too negative and consumed with self to  clearly see me, help, me, genuinely care for me, be a shoulder for me,  because when I asked for and  needed nurturing and solid energy, they had none to give… they made it all about their self.

I, therefore, honored myself and my ability to stay centered and to calm and nurture myself… with God’s grace and help. I pulled forever away from this person,  keeping them at arm’s length as an acquaintance, never to have expectations of reciprocation…  nor need of it… as they have not the ability.  Lesson learned…

There are positive and negative energies on this planet. It’s what keeps it afloat, rocking and rolling along… all of us will have negative people, things and experiences in our lifetime. It’s how we address them that either brings us back to center and to be mostly positive or keeps us captured in the evil throes of negativity.  It’s our choice which energy that drives us. I choose the positive … the positive light of God. I choose joy!