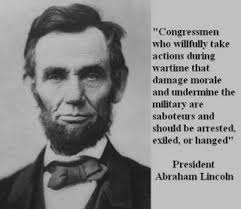 “In the first place, it is to be remembered, that the general government is not to be charged with the whole power of making and administering laws. Its jurisdiction is limited to certain enumerated objects, which concern all the members of the republic, but which are not to be attained by the separate provisions of any.” –James Madison, Federalist Paper XIV, 1787

“Hence as a private man has a right to say what wages he will give in his private affairs, so has a Community to determine what they will give and grant of their substance for the Administration of public affairs.” –Samuel Adams, A State of the Rights of the Colonists, 1772

“Above all, we must realize that no arsenal, or no weapon in the arsenals of the world, is so formidable as the will and moral courage of free men and women. It is a weapon our adversaries in today’s world do not have.”

“Democracy is worth dying for, because it’s the most deeply honorable form of government ever devised by man”.

“Freedom is never more than one generation away from extinction. We didn’t pass it to our children in the bloodstream. It must be fought for, protected, and handed on for them to do the same.”

“It has been said that politics is the second oldest profession. I have learned that it bears a striking resemblance to the first.” 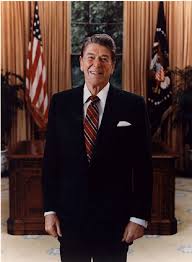 “We must reject the idea that every time a law’s broken, society is guilty rather than the lawbreaker. It is time to restore the American precept that each individual is accountable for his actions.”

“We in government should learn to look at our country with the eyes of the entrepreneur, seeing possibilities where others see only problems.”

“The work of volunteer groups throughout our country represents the very heart and soul of America. They have helped make this the most compassionate, generous, and humane society that ever existed on the face of this earth.”

“The government’s view of the economy could be summed up in a few short phrases: If it moves, tax it. If it keeps moving, regulate it. And if it stops moving, subsidize it.”

“The nine most terrifying words in the English language are, ‘I’m from the government and I’m here to help.'” Ronald Reagan

Obama thinks government control and intervention is the answer to everything.

Obama ignores the
Constitution and behaves as if he were King…

Obama left our men to die in Benghazi…

Obama is a traitor to every American and to everything American.

“I have been to 57 states. I think I have one more to go.” Barrack Obama
This puppet man, Obama, running for President didn’t even know how many states are in America.

Actual quote from “Dreams from My Father” [pg. xv]: “When people who don’t know me well, black or white, discover my background (and it is usually a discovery, for I ceased to advertise my mother’s race at the age of twelve or thirteen, when I began to suspect that by doing so I was ingratiating myself to whites), I see the split-second adjustments they have to make, the searching of my eyes for some telltale sign. They no longer know who I am. Privately, they guess at my troubled heart, I suppose – the mixed blood, the divided soul, the ghostly image of the tragic mulatto trapped between two worlds. And if I were to explain that no, the tragedy is not mine, or at least not mine alone, it is yours, sons and daughters of Plymouth Rock and Ellis Island, it is yours, children of Africa, it is the tragedy of both my wife’s six-year-old cousin and his white first grade classmates, so that you need not guess at what troubles me, it’s on the nightly news for all to see, and that if we could acknowledge at least that much then the tragic cycle begins to break down…well, I suspect that I sound incurably naive, wedded to lost hopes, like those Communists who peddle their newspapers on the fringes of various college towns. Or worse, I sound like I’m trying to hide from myself.?”

Obama is clearly a mixed-up man with mixed-up thinking who doesn’t know who he is. He associates with Radicals, Muslims and those who want to ‘change’ America from greatness to not much of anything.

Obama doesn’t have the character, background, education, experience, integrity, or mindset to be where he is. He’s never cut a paycheck, made a business profitable or fought in a war.  He has lived off the government, has been supported or backed by those out to destroy our country for all of his life. How convoluted is it that he is now running our country… running it into the ground?  Obama is not about America’s supremacy and that we lead the world. Obama is about America’s destruction.

What would our founding father’s have to say about Obama? They’d probably shout, Wake up America! This is what we warned you about and this is why we set up checks and balances in our govenmental system.

America we have a fox in the hen house. Obama is a wolf in sheep’s clothing.

3 thoughts on ““We the people are the rightful masters…”